Please, enter your email address if you want to subscribe to our newsletter.

"BULGARIANS, YOU SHOULD KNOW YOUR ORIGIN AND OWN LANGUAGE" 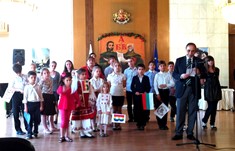 The Bulgarian School at the Embassy of the Republic of Bulgaria in Russia is the oldest school founded at a Bulgarian diplomatic mission. During the first ten years, they have been conducting classes in the buildings of several Moscow schools, but in 1983 the school moved to the Embassy complex in the Mosfilmovskaya Street.

The Bulgarian pupils study in cozy classrooms subjects, such as Bulgarian Language and Literature, My Home Country, Man and Society, Bulgarian History and Civilization, and since the present year, Bulgarian Geography and Economy as well. The lessons for each form (from 1st to 12th) and for the preparatory group of 5 and 6 year old children are given once weekly after adapted study programmes of the Ministry of Education and Science of the Republic of Bulgaria. There is a Folklore Dance Ensemble at the school the performances of which create a nonpareil native atmosphere and takes active part in organizing all the traditional Bulgarian holidays.

The educative process is conducted by highly qualified teachers whose candidacies are endorsed by the Ministry of Education and Science.

The form-finishing certificates, issued at the school year end and signed by the Ambassador of the Republic of Bulgaria in Russia, are acknowledged in Bulgaria and give students an opportunity to pursue their education in Motherland, not sitting for additional equalizing exams.

Some years in succession, the Bulgarian School takes part in the Native Language and Culture Abroad National Programme of the Ministry of Education and Science which improved the financial condition of the School and made it possible to provide free books for the pupils from 1st to 7th forms.

Since the 2012/2013 school year, by authority of the Council of Ministers Resolution of 08.12.2011, the School is included in the Ministry of Education and Science Official List of the Bulgarian Schools Abroad.

The governing bodies are the School Board of Regents (the Ambassador extraordinary and plenipotentiary of the Republic of Bulgaria is an honorary chairman) and the Parents Council.

The School is a member of the Bulgarian School Abroad Association and participates both in organized annual conferences and in discussing and solving general problems of the Bulgarian schools abroad.

The pupils not only gain knowledge in the Bulgarian School - a feeling of national identity is cultivated in them as well as a spiritual bond with the Motherland.

Let us help our children, wherever in the world they are, to feel themselves children of Bulgaria!